Documentation about the THF 2014 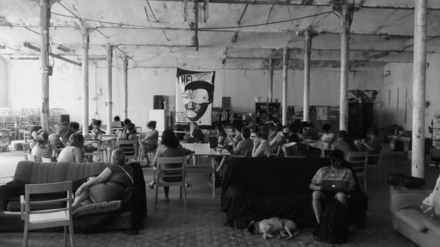 We have made a synthetic document (12 pages) about the THF 2014, you can download it here:

Motivations for a THF!

Before embarking on the THF! we believed that to have more feminist and intersectional activists and practitioners at the forefront of the use and development of liberation and (free)dom technologies, safe spaces to ignite desires were a must. Moreover, the THF! aimed at triggering this desire towards transfeminist approaches to technology and hacking that fostered differences, autonomy, liberation and social resistance.  To reach out to a wide audience that might not have identified their practice as hacking, we made explicit the two following premises: 1) everybody is an expert in relation to the technologies they use in their everyday life, and 2) as we consider gender to be one of the most pervasive social technologies ever created, we were convinced that everybody had a lot to share on this topic too.   Additionally, we wanted to convey the idea that we feel we are at a new dawn where feminist and intersectional technological resistance is arising. We wanted to join our collective forces in challenging systems of oppression that we encounter on a day-to-day basis. We wanted to collectively decry the so-called austerity measures, the financial system bankruptcy, mass surveillance, the infringement on privacy rights, governmental and business appetite for our (meta) data, the witch-hunts to rule our bodies, the criminalization of our reproductive rights, etc. Together we did not only want to reclaim, but take the opportunity to use and develop liberation technologies in fostering, caring and nurturing environments as far as possible from patriarchal and capitalist behaviors, thoughts and actions. Finally, the message we wanted to convey was: "We are building this from the ground up! Join us in imagining, crafting and developing the 'opt out' button(s) for a transfeminist insurrection."

In order to investigate those potential opt-out buttons, we proposed in the call for participation two wide areas of experimentation namely: the development of Gynepunk practices; and Feminist servers.

Gynepunk is about engaging in a radical change of perspective about medical technologies, and the so-called "professional" and medical institutions. Gynepunk is an extreme and accurate gesture to detach our bodies from the compulsive dependency of the fossil structures of the hegemonic health system machine. Gynepunk's objective is to enable the emergence of DIY-DIT accessible diagnosis labs and techniques in extreme experimentation spaces, down on the rocks or in elevators if it is necessary. It is about having these possibilities in a situated stable place or/and in nomadic mobile labs to be able to perform as much as WE WANT, in an intensive way: smears, fluid analysis, biopsy, PAPs, synthesize hormones at will, blood tests, urinalysis, HIV tests, pain relief, or whatever WE NEED. It is about hacking and building our own ultrasound, endoscope or ecography devices in a low-cost way. All this experimentation is made in complementarity with herbs and natural knowledges, oral traditions, underground recipes, seeking with hunger to generate a plethoraof DIY lubricants, anti-contraceptives, open doula domains, savage caring of any visceral hands-on technologies, such as menstrual extraction, all elevated to the maximum potential of common learning and radical self-body-power ...! Gynepunk is based on scientific methodologies and disciplines and relies on the knowledge that comes through the experience of each body and from ancestral body wisdom; that is also why documentation and memory under any form is essential! ANY format: visual treasures, sound mines, microscopic riddles, biologic cabinets, microbiologic growing centers, online seedbanks, fluids archives, fanzine (paper sms), oral decoding chorus, self voodoo healing rituals. Like those, gynepunks will ferment and mutate going fast forward to an explosive and expansive movement towards radical experiments, collective strong confidence, to build our-body politics; something that is vital to share and spread in infinite pandemoniums. Nobody can burn US! NO ONE! The witches NOW have the flames//

Feminist servers have been a topic of discussion, a partially-achieved aim and a set of slow-political practices among an informal group of transfeminists interested in creating a more autonomous infrastructure to ensure that data, projects and memory of feminist groups are properly accessible, preserved and managed. The need for feminist servers is a response to: the unethical practices of multinational ICT companies acting as moral and hypocrite censors; gender based online violence in the form of trolling and hateful machoists harassing feminist or women activists online and offline; the centralization of the internet and its transformation into a consumption sanctuary and a space of surveillance, control and tracking of dissent voices by government agencies among others. All these factors have led to a situation where the internet is not a safe space and where it is common to see feminist and activist work being deleted, censored, and/or prevented from being seen, heard or read. Freedom of expression is part of the feminist struggle and TransFeminists can contribute by providing collectively the knowledge and means to ensure their right to speak up remains accessible online, offline and wherever and under any format expression emerges. There will be no feminist internet without properly managed autonomous feminist servers. This is about regaining control and gaining autonomy in the access and management of our data and collective memories. It is also about being able to have feminist mailing lists, pads, wikis, content management systems, social networks and any other online services managed by feminist tech collectives. It is also of course about continuing to argue that social justice in technologically driven environments needs a more gender and culturally diverse presence in general. To achieve those objectives, many sessions during the THF discussed questions such as: what are the purposes of a Feminist Server? What makes a server autonomous and feminist? Where are possible (socially sustainable) models for those servers? How do we create trust among us to develop cooperative approaches to the management of those spaces of resistance and transformation?

In the following two sections you can findrough notes regarding what is TransHacFeminism and Feminist servers.

Regarding other topics of interest addressed during the convergence, those broadly fits into three main themes: Embodied Theory, Performative Tactics and Liberating Technologies. In the following section you will find a copy of rough notes taken by participants during the encounter. Those notes have not been clean up, however we believe they bring useful information and many interesting links for the people interested in going more in deep in relation to certain topics.

This stream of the program refers to the activities where content and theories were embodied by the participants. Embodied theories are theories that are lived and experienced. They emerge from the ground up; from activists’ particular experiences and/or positionality. Embodied standpoint theories aim at reconfiguring theories by limiting and reducing the existence of binaries, particularly the distinction between researchers and activists, and theory and practice. For the THF! embodied theories was about the extent to which activists can be living embodiments of a chosen theoretical or hermeneutical path. It was about trying to find answers to the following questions: How does embodied knowledge shape us in terms of social interaction, perception, subjectivities, etc? What do embodied theories do to us? Does embodied theory come to be through practices and/or the belief in a theoretical framework? The following presentations and discussions explored those questions:

This stream of the program refers to the tactics that are being used by the participants to circumvent political, economic, social and/or cultural barriers through performances. Performative tactics are actions, practices and/or projects that activists undertake to raise consciousness, bring political issues to the fore, prefigure the world they want to live in, and reframe or disrupt dominant narratives in creative ways. These tactics are performative in the sense of committing an action and possessing agency. The performative tactics undertaken at THF! took shape through the following presentations, lived projects and/or discussions:

Liberating Technologies. This stream of the program explored a variety of technologies that can be considered to be liberating. Liberating technologies are rooted in libre/free culture and its participants aim to embrace, protect and advance it. We consider corporate social media corporations (a.k.a. data empires) such as Google (we do believe Google particularly to be evil, despite it's moto: « don’t be evil! ») as having dire consequences on our private and collective lives. The profiles that are created about us when we use corporate social media platforms and search engines, record every bit of data we produce for economic, political, social and/or mass surveillance purposes. Corporations now act as mediators of our communications and in turn manipulate how we understand the world around us. Liberation technologies for us mean taking back the control of the internet, infrastructure, algorithms, inscribing new values in code, among others. Many of the activities organized under this category aimed at enhancing skills through hands-on workshops and presentations. They included:

Finally some documentaries were also screened during the THF!: Ruins VIH witch Hunt [1], Mi sexualidad es una creacion artistica (My sexuality is an artistic creation) [2] and Dreceres, a film about the Integral Catalan Cooperative that presents Calafou [3].